These organisms can destroy everything you have in your garden because it leads to serious outbreaks. To eradicate harmful microorganisms, gardeners must know how to sterilize soil properly.

Why you should sterilize Potting Soil

Soil sterilization is important when it comes time to germinate seeds. In addition, sterilized soil can help the plants to propagate cuttings and transplantation of juvenile plants.

Commercial greenhouses and agricultural producers use sterilized soil because it might contain pathogenic microbes, which are known to destroy vulnerable plants.

Whether you garden in pots or containers or plant vegetables in a raised bed, potting soil often contains harmful pathogens, like bacteria, fungus, and viruses.

These can infect the seeds sown and ruin the germination process.

If you are looking forward to growing mature plants, however, sterilization becomes less important.

A similar study by Moreno-Velandia et al. (2019) revealed that sterilization could control the concentration of pathogens and antagonists.

Before we get into the various methods of how to sterilize the soil, if you are looking for a general potting soil that is good for all types of plants, we recommend this potting soil.

It’s been our go-to general potting soil for houseplants to vegetable growing – plus it’s organic. 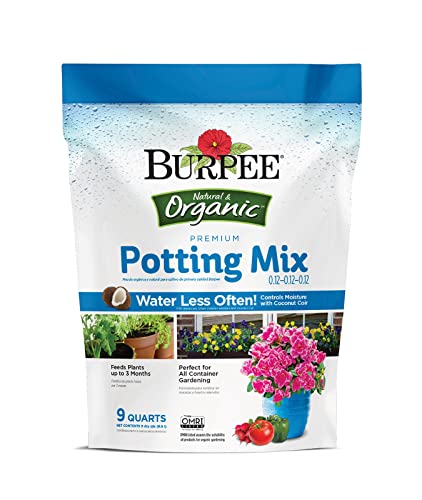 How to Sterilize Soil for Gardening

Nevertheless, sterilizing potting soil of an entire area is crucial, especially when you want to grow crops in a large area.

The four methods to sterilize soil are as follows:

This is a common and cheap procedure to sterilize garden soil. In this method, the sun sterilizes the potting soil because it drastically heats the pile.

The basic principle of solarization is to introduce light and use solar energy for sterilization gradually.

It is a well-known method for destroying weed seeds.

If you wish to sterilize a small amount, a transparent plastic bag will work fine.

In this case, you need to fill the bags with soil and keep them under the full sun for 4-5 weeks.

You will require a large and thin layer of plastic to fit a large amount of soil. To do this, shovel the soil into thin layers and spread it inside the plastic bags.

Make sure there are no adequate ventilation holes in the bag because these allow the microbes to enter.

To sterilize a huge area like the entire garden, you need to cover the area with plastic wrap.

The clear plastic will heat the area and induce the sterilization process.

This process reduces the unpleasant odor because it heats the soil continuously.

2. Sterilizing Soil with a Microwave

This is an excellent option to sterilize potting soil. However, quantity becomes a major drawback in this process.

You cannot eliminate harmful bacteria in a large area, which is feasible in solarization and chemical treatments.

If the quantity of the mixture is small, a gardener can obtain a sterilized potting mix.

You will obviously need access to a microwave oven.

This method could destroy fungus gnats of potting soil. To do this, place around 2 lbs of the moist soil in a plastic bag (zip-top).

The mixes should be damp but not wet.

You don’t need to close the zip of the bag, instead, leave it open and place the bag in the microwave.

You should heat the potting medium and monitor the oven temperature until the internal temperature of the soil reaches around 180-200-degree Fahrenheit.

You then measure the temperature using a meat thermometer.

Finally, remove the sterilized potting soil from the oven and close the zip.

Leave it in a cooler place and wait until it reaches room temperature.

This is an effective method to sterilize the soil.

One could use a pressure cooker and use its steam for sterilization. One could also use boiling water as the sterilizer.

You will require the following items:

For the pressure cooker process, add a few cups of water and then place around four inches of soil in the container over the water.

Close the lid and turn on the cooker. It will create steam.

Leave the steam valve open. The pressure cooker must be set at 10 lbs of pressure for around 15 to 30 minutes.

For the non-pressure cooker method, add an inch of water in the pot and place the rack.

Fill the oven-safe container with mix and cover it with aluminum foil.

Close the lid of the pot and allow the steam to leave.

Also, if you have a large land full of unsterilized soil, you could adopt chemical treatments to sterilize your soil.

Chemical treatments are successful if the gardener applies the pesticides in a correct manner.

The wrong application might make the remaining pathogens resistant to that specific substance.

Some common and effective sterilizers for removing pathogens are:

So out of the four methods, I’d suggest not using chemicals.

No, sterilization only kills pathogens because it increases the soil temperature.

How to Sterilize Soil to Increase the Germination Rate?

Seed germination begins when all the factors are in favorable condition.

Sterilization increases the chances of a successful germination rate and reduces the risk of soil-borne diseases.

What Is the Best Time for Sterilizing Soil?

The best time to sterilize your soil is before sowing seeds.

Do I Need to Sterilize Potting Soil?

Yes. It is always safe to sterilize potting soil (even fresh potting soil and store-bought soil) before seeds are sown or transplanted.

You should also purchase newly sterilized potting soil and a sterilizing container.

Hopefully, the instructions above give you an introduction to how and why sterilizing potting soil is important.

Among the four sterilization methods, solarization is regarded as the best one because it is environmentally friendly.

You could also disinfect enough potting mixes for your garden.

The major drawback of the solarization process is the duration – it is a long process.

At the same time, we discourage using chemical treatments to sterilize the land being since you never want to add unneeded chemicals, but it is still effective.

Along with some basic plant knowledge, you will have a better chance of growing whatever you wish for!