If you’ve been noticing reddish-orange spots on your cannabis leaves lately, your marijuana plants could be suffering from leaf rust or rust-colored spots – especially rust spots on leaves during flowering.

Hold on, you may be asking how do plants rust?

Obviously, rust spots on cannabis leaves are not the same type of rust that occurs on metal objects. Instead, rust-colored spots on your plant are caused by either:

Rust fungus manifests by creating a powdery rust-colored deposit on the leaves. Sometimes, the fungus leaves behind little brown spots or a dark brown edge on the leaves.

While rust spots generally don’t kill the plant, it certainly does have other unwanted side effects – which we discuss later on.

This article seeks to explore everything you need to know about rust spots on leaves during flowering.

Also, as indoor growers, what preventative measures we can do any further rust fungus problem from spreading to remaining plants in your grow space.

Exactly What Causes Rust Spots On Leaves During Flowering?

Rust fungus is caused by a special fungal parasite that only affects plants. Its scientific name is called Pucciniales (also known as Uredinales).

However, unlike some other forms of fungi, which are decompose living organisms, rust fungus only affects living plants – not dead matter.

This is the reason why the parasite allows the plant to stay alive but at the same time causes damage so the plant can’t absorb nutrients properly.

Apart from a fungal infection, these spots generally tend to be caused by a magnesium or calcium deficiency (or possibly nutrient burn).

However, in most cases, the root cause of rust spots is due to fungus or rust mold.

How To Identify Rust Fungus On Leaves

Plant rust occurs when the external environment is heavily laden with moisture and dampness.

Like most plant-based parasites, rust fungus attacks plants when exposed to dank conditions for too long.

This infection is spread through the production and distribution of fungal spores.

So, if a single infected cannabis leaf contains these spores, it can easily spread it to nearby leaves within the same plant or even spread the disease to plants in the vicinity.

The fungus is spread by air and water. Wet surfaces are essential for the parasite to multiply.

This is why you’ll often find an increased occurrence of rust spots across your plants after watering them with plain water.

Here’s how to figure out whether or not your plants have rust spots:

Any weed plant suffering from rust will boast these signs and other symptoms.

The exact symptom will depend on how far the infection has progressed. In the final, most advanced stage of infection, you’ll find those signature reddish bumps infecting the majority of the leaf surface.

To determine if these spots are a sign of an infection or nutrient burn, rub a spot with your fingers.

If the rust rubs onto your fingers, it’s an infection. If not, it’s a nutrient burn.

As previously noted, the fungus isn’t going to kill your marijuana harvest.

The parasite needs an organism to stay alive, hence serving as a continuous mode of nutrition for the fungal parasite to feed off.

However, even though you don’t need to worry about your plants dying of a rust infection, you should still do your best to purge your plants of this unwanted pest.

If you allow plant rust to sit for too long on any one of your plants, you run the risk of infecting your entire garden.

While it’s true that rust spots don’t infect every plant species, they still can infect the majority of your plants.

Some plants are immune to a certain variety of the plant rust parasite but may develop an infection when exposed to another strain of the fungus.

Regardless, you should start purging your infected plants of this parasite as soon as possible, or else it may transfer onto the remaining plants and cause an infection there, too.

If this happens, you’ll need to start growing new plants.

The plant rust parasite spreads notably fast thanks to its spores.

These spores are remarkably sturdy and can’t be destroyed by extreme temperatures, flooding, or infection thanks to their hardy chitinous external layer.

This is a signature feature of all fungal spores, making them excellent at resisting external danger.

Still, despite its tough spores, leaf rust fungi can be completely removed from your cannabis crops as long as your employ the right methods.

Before we dive into rust control and prevention methods, though, here is a list of reasons why plant rust can be harmful to your marijuana plants:

If your cannabis plants are experiencing leaf rust, don’t worry.

We’ve got a list of techniques you can use to purge your plant from this harmful disease and a series of ideas that can help prevent the infection from developing in the first place.

While there isn’t a fixed, straightforward method to curing your cannabis plant, you can still try to control rust using these tips.

If you control the existing disease and prevent it from spreading to other plants, your grow room might be able to recover and grow back into its original healthy form:

As an aside, if you’re looking for a great set of pruning shears, we recommend these pruning shears as it’s been really useful to us. 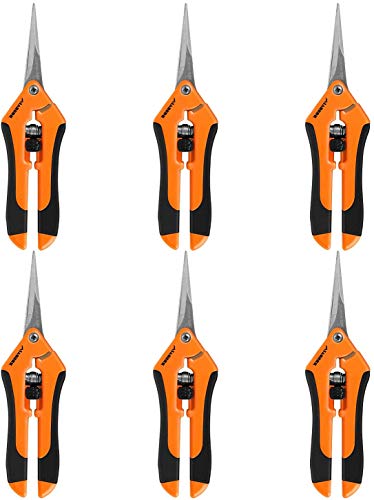 We recommend this copper spray as it has complete gotten rid of the rust fungus for us. 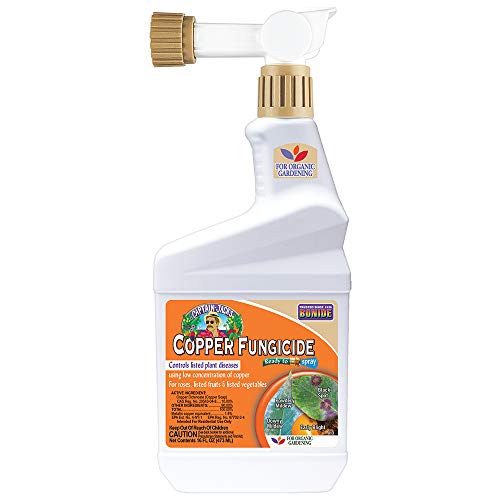 Successfully employing these methods can help you control rust spots on the leaves, especially during the flowering season when your harvest will require extra water.

If you allow the rust to keep growing, you may reach a point where you’ll need to invest in all-new plants.

Rusty brown spots can also be a sign of a magnesium or calcium deficiency or more than likely a lack of magnesium than calcium.

Generally speaking, minor nutrient deficiencies won’t affect the flowering of your weed plants, but once they flower, the resultant deficiency will worsen.

This is because the plant needs more nutrients in the flowering stages.

However, if you are doing address the mineral deficiency, it will worsen.

The rust spots will continue onto the middle-aged leaves (those slightly below the upper leaves of the plant) and spread quickly to all the remaining leaves.

This results in a lower production of flowering.

You need to treat the nutrient deficiency immediately. If not, it leads to a plant unable to uptake calcium and magnesium.

This condition is called “nutrition lockout” (we address this later on).

How to Find Out if It’s A Nutrient Deficiency

First, make sure that the rusty spots are indeed the result of the plant not getting enough magnesium or calcium.

This can be the result of not feeding it the plant enough, or because the nutrients are locked out. To determine what the cause is.

You’ll need to look at the symptoms that are common to a deficiency of magnesium or calcium.

Symptoms Of Magnesium or Calcium Deficiency

When the plant leaves begin to curl, this is an indication that the plant lacks calcium.

However, if the leaves begin to turn yellowish but the veins stay green, this is a clear sign that the plant is not receiving insufficient magnesium.

In either case, you will need to provide your plant with more nutrients.

However, if you give you are providing enough different nutrients to your plant and the symptoms don’t resolve themselves, the problem is that the plant is simply not able to absorb the nutrients.

What is Nutrient Lock Out?

Nutrient lockout is simply when a plant is unable, for whatever reason, to absorb and feed itself all nutrients from the soil.

There are several reasons for this, but the most common issue is the varying pH level in the soil.

Minerals and nutrients have varying degrees of pH levels where they are absorbed the best.

If the ph levels are outside a certain range, the mineral or nutrient is unable to be digested by the plant – no matter how much you feed the plant. The nutrients are simply locked out.

We personally like this pH meter. It’s not expensive and it’s accurate enough for the everyday weed grower. 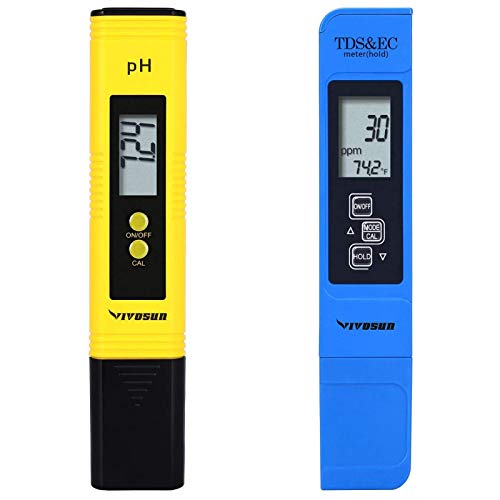 If the soil pH level is in the correct range, then other possibilities for nutrient lockout are:

With that said, if your plant is locking out magnesium or calcium uptake, other nutrients will be locked out as well.

So, if you fix the magnesium or calcium issue, you will also be solving other nutrition deficiency issues.

How to Fix Nutrient Deficiency Issues

First, check the pH level in the soil to rule this out. You easily test pH levels in the soil by getting a pH meter.

Soils with pH levels around 6.8 to 7.2 are the best for both calcium and magnesium uptake.

After testing the pH level in your soil and it’s far off from this range, then it’s likely that is the reason for your nutrient deficiency.

If the pH level in your soil is acceptable, then the simple answer is that you need to provide more nutrients to your plants.

If the issues you face are not a fungus or nutrient lockout, the third problem might be nutrient burn. This basically means there are too many nutrients.

To resolve this issue, you need to flush the nutrients out tap water.

Simply, add tap water to your soil to flush out all the nutrients out. Once you give it a good flush, there should be very little nutrients in the soil.

You will want to add a little nutrient back into the soil.

Otherwise, you will start noticing your plants begin to droop. We suggest giving your plants half the quantity they were getting before and monitor them closely.

Successfully indoor and outdoor growers will need to be on the look out for rust spots on your weed crop.

Use the methods described in this article to determine if your rust spots are caused by fungus or by a lack of nutrients.

Hopefully, you’ll be able to fix rust spots on your leaves that happen during the flowering process.

By doing so, you should be able to increase your crop yields or save the rest of your harvest from getting rust spots.

If you have any other questions, please do leave a comment below and we’ll try to get back to you.