Gardens and lawns beautify our properties, but weeds can ruin them if they look unruly and wild.

A weed barrier under mulch is more than just a decorative look; it ensures weeds do not get sunlight to grow.

Unattended weeds will make plants weaker because they can absorb the nutrients intended for your plants. Worse, they can strangle your plant’s roots.

It’s frustrating how weeds will get everybody’s attention.

This is why we recommend using a weed barrier to stop weeds from growing in mulch.

A good weed barrier under the mulch will permit sunlight, air, and water to reach plants.

Likewise, mulched lawns have fewer weeds, grow healthier, and can survive in drought.

As easy as it sounds, there are certain aspects you must consider first. In this article, you will learn:

The Purposes and Benefits of Weed Barrier and Mulch

If you are looking for a weed barrier, we suggest using this weed barrier to block any weeds that may try to grow through your mulch.

We have a landscaper friend that uses this weed barrier in all his landscaping projects – and no weeds have ever grown through it. 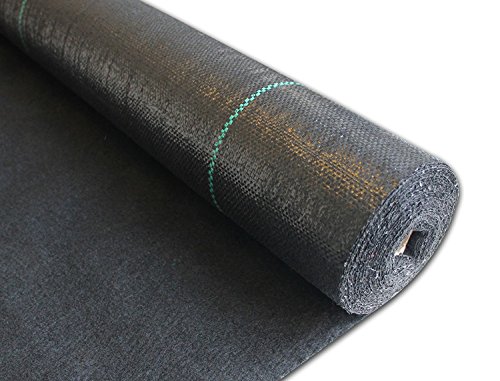 First things first, weeds will always go back, no matter how tedious you try to combat it.

They share the exact source of growth with your living plants.

So, as long as you keep growing plants, weeds will come, too.

Fortunately, gardeners have discovered the art of putting weed barriers under mulch.

Mulching is the act of putting a protective barrier over your bare soil and around your plants.

In this way, you can control weeds, and subsequently, kill weeds.

A weed barrier under mulch prevents the development of weeds.

Weed barrier cloth or woven landscape allows some air, water, and nutrients to reach the soil.

Yet, it will block light that will prevent the growth of weeds.

As a result, both homeowners and garden professionals can block weeds without killing soil microorganisms nor drying out the ground.

Additionally, weed barriers block out the sun from the soil.

Although sunlight will still pass through the barrier, it will not be extensive.

As compared to the first advantage, barriers and mulch keep water in the soil from evaporating.

Yes, herbicide weed killers are no doubt effective, but they can harm the environment.

Weed barriers and mulch break the fall of water.

Consequently, it lessens the force when water hits the grounds.

In some circumstances,there’ss no need to add decorative landscapes such as tree barks.

This is because the weed barrier already inhibits mulch contact with soil and slows its decomposition.

However, not all homeowners and landscapers would want to see a bare weed barrier, which is why mulch is placed on it.

It also costs less money and effort to replace it whenever necessary.

But to guarantee zero weed growth, then a weed barrier under mulch is preferable.

A weed barrier is made out of landscaping cloth intended to prevent soil from eroding through the wall.

Hence, it is first used vertically.

Years of DIYs and trials later, people started to use it horizontally on the ground before planting shrubs, trees, and perennials.

As mentioned earlier, the main drawback is that a weed barrier under mulch limits soil absorption of oxygen, moisture, and nutrients.

what to put under mulch to prevent weeds

Inorganic mulches are commonly used because they last longer.

But this is a wise move because it can delay the breakdown of plastic due to sun exposure.

Unlike plastic weed barriers, most cloth barriers are puncture resistant.

Thus, it becomes harder for weeds to find a place to get through for sunlight.

Although cloth or woven materials are considered heavy-duty barriers, they still have the ability to let moisture and air through.

Personally, I prefer woven or fabric weed barriers because they have more capacity to let air and water through.

But this also means there’s undoubtedly space for weeds to crawl out and penetrate the fabric over time.

On the other hand, plastic barriers tend to negate the organic benefit of mulch.

Also, they can backlog rainwater, which can attract insects and diseases.

If you favor a plastic barrier, it’ss better to have drip hoses or soaker hoses laid on the soil surface.

Meanwhile, it’ss not advisable to use clear plastic weed barriers because theyaren’tt as effective as black plastic.

Remember, you have to block the sunlight, and black plastic has a more blocking capacity.

Inorganic mulches can prevent roots from getting adequate water.

So, you can freely pick between woven or plastic. Just know that they both have benefits and weaknesses.

They are normally placed in layers several inches thick.

However, weed formation remains possible when you use natural mulch.

On the bright side, therewon’tt be a lot of nutrients in that layer for the weeds to damage your growing plants.

One of the tricks that work well for me is using thick layers of newspaper or cardboard mulch beneath other natural mulches.

In this way, I can effectively block weeds while supporting the soil.

Likewise, gardeners who want to develop and maintain dynamic living soil, believe that natural mulch is the only necessary weed barrier because it can improve the soil as they decompose.

This leads us to the question…

Do You Need Weed Barrier If You Put Down Mulch?

Like all other gardening decisions, it would depend on your needs, situation, and preferences.

We mentioned earlier that some people believe natural mulches such as compost and grass clippings would suffice.

But sometimes, weeds can overpower them and grow without you noticing.

Both organic and inorganic mulching prevent weeds in the first place.

However, there are instances wherein cloth or plastic weed barriers have disadvantages.

This is particularly true when you have to add inches of mulch on top for a natural look.

When seeds get trapped in the surface material and sprout above the weed barrier, then the cloth or plastic becomes ineffective.

In addition, even plant roots or shrubs will tend to grow above the weed barrier instead of beneath it.

Worst case scenario, the plants will get entangled in the barrier. Subsequently, the plants might get damaged.

As mentioned, water and air might find it difficult to penetrate the plastic.

This encourages roots to grow very close to the soil surface to get oxygen and moisture.

When this happens, you get shallow roots that will suffer from a lack of nutrients, water, and air.

First, pick the type of weed barrier and mulch. Second, know how to place them properly.

Therefore, it’ss time to learn the right way of putting a weed barrier under mulch.

How to Place a Weed Barrier Under Mulch?

Proper installation of a weed barrier under mulch is vital because you must not create any space for weeds to sprout.

I highly suggest removing any debris, rocks, or old mulch that could damage your weed barrier.

And it goes without saying, make sureyou’vee killed and pulled any preexisting weeds.

Only then can you spread a layer of your preferred type of weed barrier over the planting area.

If there are plants growing in the area, cut holes in the weed barrier to fit over them.

Next, overlap the strips of the weed barrier so the weedscan’tt push their way through the edges of the barrier or mulch.

If you want to place new plants in the area before laying the mulch, cut small X shapes into the weed barrier.

Then, dig a hole in each X and put one plant inside each hole.

Finally, put a 2 to 4-inch layer of mulch over the whole surface of your weed barrier.

Spread the mulch evenly over the weedbarrier’ss edges, so youwon’tt see the plastic.

Youdon’tt want the weed barrier to be creeping out in plain sight.

Once exposed it is very difficult to tack the weed barrier back down.

How to Stop Weeds from Growing Through Mulch?

Pesky plants such as weeds aregardeners” enemy number one.

Not only do they block the beauty of gardens, but they can also rob important nutrients and moisture from your flowers and lawn.

To keep it that way, the best method to stop the weed from growing through mulch is by putting a layer of weed barrier underneath.

Despite some drawbacks, weed barriers under mulch prove valuable because it helps you prevent weed growth.

Whether you choose to roll it beneath gravel, in mulched walkways, or under a permeable patio, you can make sure your plants are safe from weeds.

The final decision whether to use a weed barrier under mulch, a bare weed barrier or mulch alone would depend on your judgment.

We’ve discussed your options – time to keep weeds at bay.

Related post: Should You Use Cedar Mulch in Your Garden?