Any organic material can be used to create mulch. Mulch is basically a layer that is put on top of the soil for various purposes in gardening.

Your typical mulch is made up of wood from bark and wood chips are the most popular types of shredded wood mulch, but there are several other types of mulches such as grass clippings and pine needles

However, using cedar mulch is superior to conventional ones because it offers many benefits such as:

In this post, we discuss the purpose of mulch, how cedar shavings are made, and finally, should you use cedar mulch in your garden or landscaping.

What is the Purpose of Mulch?

Why is mulch used in flower beds, vegetable gardens, and landscaping?

The main purpose is to ensure that the ground is covered. Without cover, the soil runs the risk of deteriorating and soil erosion.

Rainfall, wind, dry conditions, and even temperature changes deplete the soil by causing it to lose nutrients and other organic material.

At its most basic function, it is basically a layer that is put on top of the soil. The various purposes are as follows:

Fun fact: When tilling (or working the soil), ten percent of the soil’s carbon is lost in a day.

Since the goal of farming and gardening is to grow better crop yield, you must take care of the soil.

This is one of many reasons why farmers and gardeners use mulch in their gardens.

How is Cedar Mulch Different?

Compared to regular bark mulches and other organic mulches, the obvious is that cedar mulch is produced by clippings and shaving from cedar trees.

However, cedar is superior to any other type of wood due to its extraordinary properties.

For example, a cedar tree is generally more durable than other woody plants. It is non-toxic so it can be used in both food growing areas as well as landscaping in your backyard.

However, the most distinct feature of cedar mulch is its insect repellent capabilities.

Cedar wood emits hydrocarbons, phenols and acids that is also aromatic that acts as natural pesticide.

Why Do Gardeners Use Shredded Cedar Mulch?

Using cedar mulch is superior to conventional mulch because it offers many benefits over other mulches because:

In fact, cedar mulch is considered to have properties that can fight many insects and pests that can harm tender plants. These phenols are pleasant scents and keep young plants safe from bugs and insects.

Further, the phenols that deter many insects are the same acids hat are released and inhaled by rodents. These phenols are toxic to rodents.

When it is in the rodent’s respiratory tract and later entering the circulatory and blood system, it severely damages their livers.

You can retain moisture in your soil by using mulch. Cedar is very effective in water retention and thus keeps the soil moist.

The soil moisture can quickly evaporate in dry environments. But if mulch is used, it will protect the soil from the dry air and keep the underlying soil moist.

The result of this is that you will be able to water your plants less often as the soil will not dry out as easily. The benefit is that your plants can hold out longer between each watering.

Cedar Mulch Is a Weed Deterrent

Cedar Mulch suppresses weeds very well. Like any other plant, a weed can not grow without sunlight.

By blocking the source of light, it can effectively be a very good weed deterrent.

However, with that said, weeds are very good at seeking out any light there is. You might have some weeds grow through mulch.

This is unfortunately something all gardeners and landscapers have to deal with.

Related post: Using a Weed Barrier to Stop Weeds from Growing Through Mulch

Beneficial insects and microorganisms are constantly at work in the soil, and they generate heat. If the heat is not dissipated into the atmosphere, the roots of your plants will remain warmer and safer.

Is Cedar Mulch Harmful to Plants?

There have been many misconceptions that cedar mulch can be harmful to plants.

It’s noted in various gardening guides on the Internet considers cedar sawdust to be dangerous to both seeds and mature plants.

It’s unsurprising that widespread concern persists about the safety of cedar-based mulches for landscape plantings.

However, there is no direct evidence to support the belief that cedar mulch poses a risk to plant life forms in any way.

When Should We Avoid Cedar Mulch?

It depends on what purpose you intend to use the mulch.

Obviously, the safest use of the mulch is for landscaping such as pathways and flower beds.

Since you are not requiring the soil to recover and the mulch will not harm your gardens, this is a very healthy application of cedar mulch.

This is extremely popular, although there is some debate about its use in flower beds.

The explanation for this is because some believe cedar mulch contains allelopathic compounds, which are chemicals that are toxic to plant roots.

However, this is not true.

Although the fact that cedar mulch produces chemicals that influence the growth of your plant has been debunked by academia that has shown cedar mulch to be beneficial rather than harmful for any gardening situation.

When Can I Mulch My Garden?

People usually mulch their plants, only after the soil has had a chance to warm and dry slightly. Also, remember that biennials and other self-pollinating plants have a shot at seed reseeding.

Usually, you want a 2 or 3-inch layer and if you are using the right material, about half of this works into the ground before you fill up in the fall or the coming spring.

Is Cedar Mulch More Expensive than Other Types of Mulches?

The cost of cedar shavings is not significantly more than other types of mulches. If you consider that it is a great pest and insect deterrent, you get a better quality product versus ordinary mulch.

The pricing that we found was pretty reasonably priced. This cedar mulch was a top recommendation by our landscaping friends. 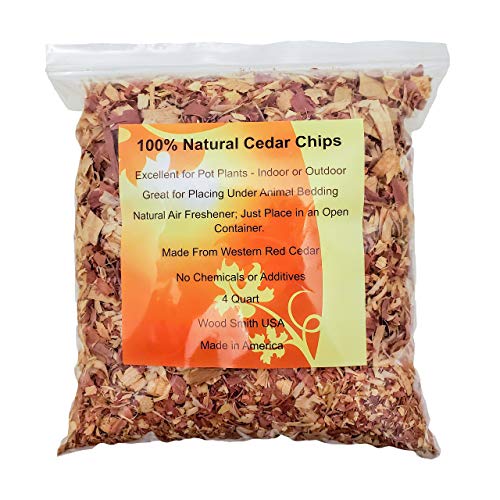