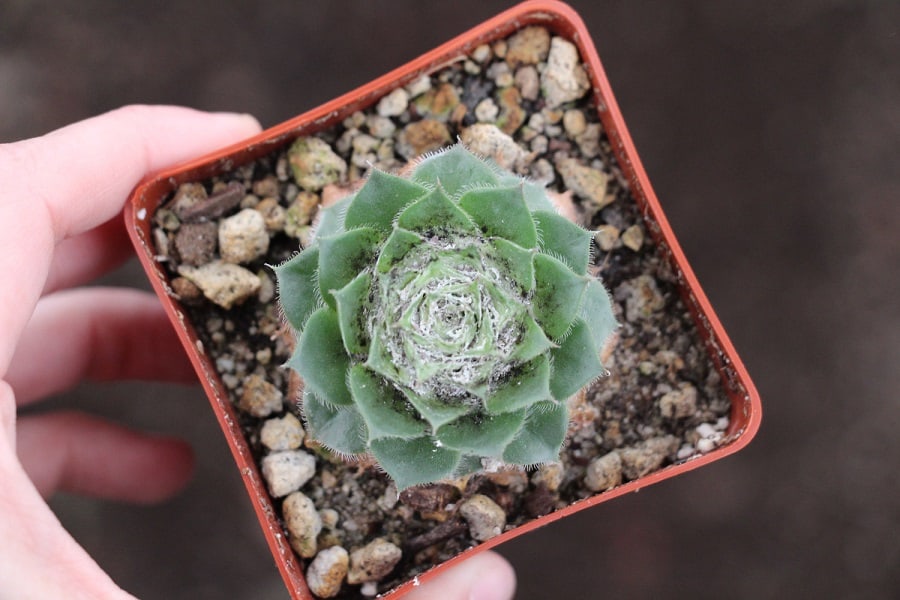 Pests are a problem with any type of gardening or plant growth, and with succulents, you actually have a harder job than most.

This guide is about succulent pest control and how to get rid of them easily. Read on to get the value out of it!

Succulents have so much moisture inside the leaves, and because of this, they attract more pests than you might think.

These are the most common you’ll find, and how you should rid them from your succulents.

Scales are little insects in a variety of over 7,900 breeds, which attach themselves underneath the hard shells of succulent plants.

They burrow underneath and attach like leeches, sucking the moisture out of plants.

You never just have one or two scales; it’s usually a mini colony of them that work quickly to absorb all the moisture from your succulents.

They’re not that fond of the sun, so if you keep your succulents in shade more often than not, you make it a more likely candidate for scales to attach to.

It’s not a particularly fun process, but you need to remove each and every scale.

They’re large enough that they are visible; you won’t need a magnifying glass to tell where they’re at.

Toss them far away from your succulent. This is an egregious process, so another option that works is a good amount of pressure in a garden hose spray nozzle.

You have to be careful not to damage the plant in the process. Systemic insecticide is also known to work quite well.

These little devils are the bane of every succulent gardener’s existence, but the good thing is, they’re not as hard to get rid of as some of the other pests you’re going to see on this list.

These are heavily attracted to moist soil, and are a common issue with vegetable farmers and container gardeners as well.

If your soil is too moist, or your plant is overhydrated, then these little suckers are going to show up.

Fungus gnats are known for laying eggs in super moist soil. If you’re a container gardener, this is something you’ve likely had to face in the past.

You can start by not overwatering your succulents. Find the right water to soil ratio you should have, and stick with it.

The best way to deal with this problem right away is to transplant your succulents, and leave as much of the initial soil behind as possible.

Other than that, you can actually pour boiling water into the soil next time you have to water them to kill the gnats eggs and fungus, and then spray the plant down with a white distilled vinegar and water solution to send those on the plant packing.

Lastly, while it’s not conventional, you can put cinnamon (not cinnamon sugar) onto the top of your soil to prevent them from returning.

While I wouldn’t say aphids are the worst to get rid of, it’s not going to be a fun ride, either.

You can notice these pests because they have this body shape that looks like a raindrop.

While you’re going to see them with mostly greenish bodies, other colors can happen in different regions, so have your eyes peeled.

They will begin to make the leaves of your succulents appear misshapen or deflated, which is a sign that they’re doing real damage.

They leave behind a white substance that looks a lot like sugar when you get close to it, so as if eating your plants wasn’t bad enough, their substance is left behind and can cause black sooty mold.

You’re going to think this sounds crazy, but diluted vegetable oil will actually do the trick.

You have to mix it into a bottle of water to get it to work properly. 16 oz of water should be used, with about one teaspoon of vegetable oil in.

Mix it up until the oil is at least strung through all the water, and spray as soon as possible before separation begins.

Alternatively, using pressurized water from a spray head on your garden hose will do the trick as well.

I don’t care what kind of plants you grow, you’ve likely heard about this menace to agriculture and the threat that it poses.

There are so many different types that it makes it feel impossible to actually rid them from your succulents.

You can have mealy bugs that burrow under the soil and sap liquid from the roots, some that get under the skin of your plant and sit in the membranes where they leech water, and others will asit on the surface of your plant.

They’re everywhere, and treatment is a paint.

High-concentration systemic pesticide is going to be your only go-to option.

There’s no tweezer-plucking or harsh water from a spray hose here that will work.

Because they can get into just about anywhere on your plant and cause major damage, we have to cut them off from the source.

Use a systemic pesticide with a high concentration, and water your plants.

Mealy bugs can sit in the roots, so this is good to do from time to time anyway if you notice your plants seem like the base is dry, but the tips of the leaves still seem plenty hydrated.

There is no other known way to get rid of them. Just be sure to do a thorough inspection at the end so you can know if they’re gone or not.

“Wait, but I thought ants were good and helped move soil?”

Well, you’re right, but only if you see an ant or two here and there.

These little guys are scavengers, so you’re going to see them in singles or duos, but when there’s a trail of them coming from or going to your plant, there’s a problem.

Insecticidal soap is the number one way to get rid of them.

Mix this into an empty spray bottle, spray it down on the plants, and that should send them packing.

If that doesn’t work, you can make a rubbing alcohol or soapy water spray.

The outside of your succulents aren’t going to be damaged by this, so long as it’s diluted enough and doesn’t completely soak your plants.

These little insects are actually just mites and not related to arachnids at all; they just do something slightly similar to what spiders do.

They’ll create a silky material that they use to get around, and appear bright red in coloration.

Sometimes they’re small enough that the naked eye can’t see them, but the presence of these makeshift webs will be a telltale.

The reason these are so aggravating is that they scar your plants.

Once they deal damage, it doesn’t heal; your plant has to basically grow around it and eventually shed this section off.

Unlike most plants and insects, using a systemic pesticide here is actually useless against the red spider mite.

You should utilize a thorough application of straight-up pesticide, and be sure to do it in a space where the mites can’t go to another plant of yours.

Quarantine your infected plants, potentially in a cheap pop-up greenhouse (these can be found for less than twenty dollars), and do the application in there.

You really want to make sure they’re good and gone before you rejoin your plants.

It’s good to have a variety of insects in your garden… just not these ones.

While we’re okay with having earthworms tilling the soil for us, slugs and snails leave behind destruction in their wake.

Their slimy trails and the movement of their bodies actually strip some of the top layer of growth off of succulent leaves.

If you just notice one or two snails (which can do more damage than you’d think), move them or dispose of them.

If it’s more, that’s when you have to act. There are different soil treatments by a number of brands that allow you to include them with your waterings, but you can also use snail and slug bait.

This kills them, but it will only affect those that are crossing over the boundaries of your plant, so you aren’t wiping out an entire garden’s worth of snails in one sitting.

Pest-Free Succulents for the Future

Now that you know what pests to look out for and how to get rid of them, you can ensure your succulent plants’ survival for the foreseeable future.

These methods may need to be repeated, but at the end of the day, it’s worth it to ensure complete safety and security for your plants.