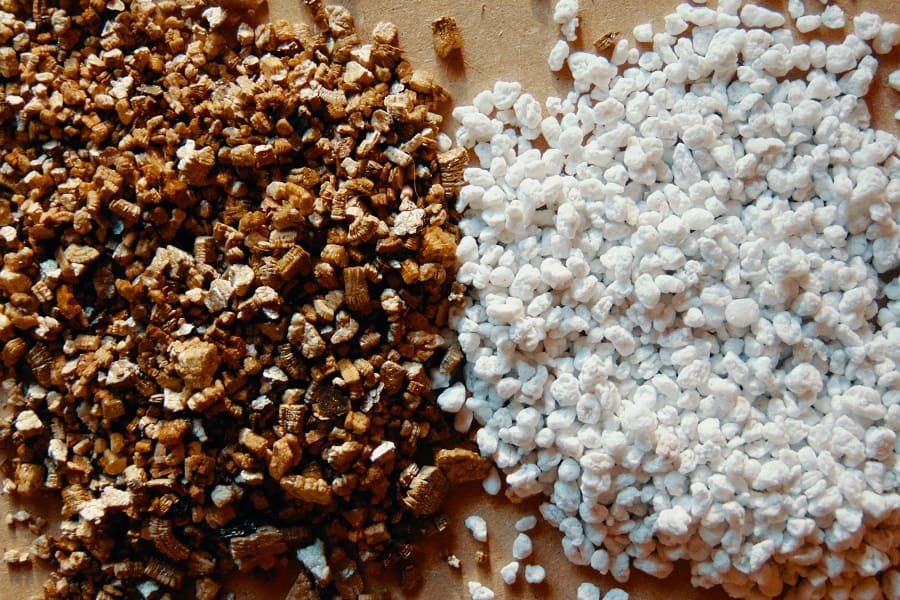 Both Perlite and Vermiculite are inorganic materials, made by taking materials mined from nature. They expand to create a final product.

They are both used as soil amendments. Such as traditional gardening and as a growing media in hydroponic gardening.

Are perlite and vermiculite the same thing? or are they Interchangeable?

The answer to both parts of that question is, no. They can be in a similar way, but they are not interchangeable.

Perlite is glass found in volcanoes and saturated with water. When heated to 1,600 degrees Fahrenheit it pops like a corn kernel turning into popcorn.

That expansion creates something that is thirteen times larger than the original piece.

Thus, giving you a final product that is a very lightweight material. Per cubic foot, finished perlite weighs only six or seven pounds. Being it expands due to the water exploding and evaporating, it creates many tiny air pockets.

These hold water on the outside, not inside, which allows the plants to get the water easier. It tends to dry out faster but is reusable. The color of perlite is white, which is why many people confuse it with Styrofoam.

Vermiculite is a group of minerals (aluminum-iron- magnesium) that mined from rocks. Like perlite, it is also heated to a very high temperature of 1,652 degrees Fahrenheit.

It has very tiny droplets of water in it. Instead of popping, heat turns it into accordion shaped, worm like structures. These, composed of many layers of thin plates. These particles are anywhere from eight to twenty times larger.

Due to the chemical composition, they are lightweight, odorless, and can absorb water. The color of vermiculite can range in color from black to shades of brown and yellow or gold and coppery.

Perlite in the Garden To Use or Not to Use?

Perlite is good if you have plants in your garden that need the soil to dry out completely between watering.

Say, for example, if you want to grow a cactus and succulents or some other plant that likes it dry perlite would be great to add to the soil.

How Vermiculite Can Help Your Garden?

Vermiculite is the opposite of perlite. Used for plants that want the soil to stay more on the damp side and not dry out. It will absorb three to four times its volume in water, keeping the soil moist and a tad heavier.

Since it acts like a sponge, it does not aerate the soil as much, meaning less oxygen around your plant’s roots.

Be wary of using too much vermiculite, all that extra moisture can lead to root rot. Being that it retains moisture, used as a cover layer to help seeds germinate without the bed drying out.

A Couple More Differences between Perlite and Vermiculite

While perlite is great in keeping the soil mix from compacting, it has an alkaline pH between 7.0 and 7.5. If used too much it can cause minor nutrient issues.

Tying up the fertilizers, most plants prefer more acidic conditions. Vermiculite has a pH between 6.5 and 7.2, making it more neutral and is better for most plants.

Perlite added to clay soils will end surface crusting and wet spots. The insulation properties of perlite will maintain soil temperatures. Horticultural perlite has different grades depending on how you want to use it.

Most general applications can use a fine or medium grade. Considered sterile and free of weed seeds and diseases.

Vermiculite preferred by many plant professionals for the rooting of cuttings. It retains moisture and plant foods, releasing them to the cuttings as needed.

Combined with other things such as peat moss, pine bark, or compost, it creates faster root growth. Thus, providing the young roots with better stability.

Vermiculite, considered permanent, as it will not deteriorate. It is clean, non-smelling, non-toxic, sterile and will not get moldy or rot.

perlite vs vermiculite: What is the best growing medium for hydroponics?

Both have been around for many years as a soil additive. They both also have life in the world of hydroponics, as a great compliment to each other.

In hydroponics, the growing medium, such as the perlite or vermiculite, takes the place of the dirt or soil. Not by providing the nutrients.

That is what the water flow does. It is so the roots will support the weight of the plant(s) and hold it straight up.

Pros and Cons of Perlite and Vermiculite in Hydroponics

Perlite used by itself, though rarely, because of its light weight. The downside in certain hydroponic systems the water interacts with the growing media.

Thus, shifting it around too much and could wash it away. It is much better as a mixture with other mediums, like vermiculite.

Perlite also has good wicking action which for a wick-type hydroponic system is ideal. Perlite is also cheap and easy to find.

There are a couple of drawbacks to perlite in hydroponics. It doesn’t keep water and the dust is not something you should be breathing in.

Considered a nuisance dust it will bother your eyes, throat, and lungs. You should always wear some kind of a dust mask when using it.

Mix Your Own Soilless Potting Mix for Hydroponics

Here is how the two work so well together. Vermiculite retains moisture. Perlite doesn’t. Use that 50-50 mixture as a growing medium in your drip type hydroponic system as well as an ebb and flow type system.

It will keep the water and nutrients and still supply the roots with plenty of oxygen. Vermiculite is also cheap but tends to be a little harder to find.

There is one major drawback of vermiculite. It retains so much water, if used by itself it will suffocate the roots of the plants.

Both, perlite and vermiculite can improve your soil conditions. Such as aerating your soil, so more oxygen can get to the roots and improving water retention, or lack of.

They are both used in the aquaponics and hydroponics industry as a soil-less medium. You should now understand the difference between the two.

They are not interchangeable. This will be helpful when you are looking for your next soil additive or hydroponic medium. Your plants will thrive.

2 thoughts on “Perlite vs Vermiculite: What’s the Difference? and Which is Better?”