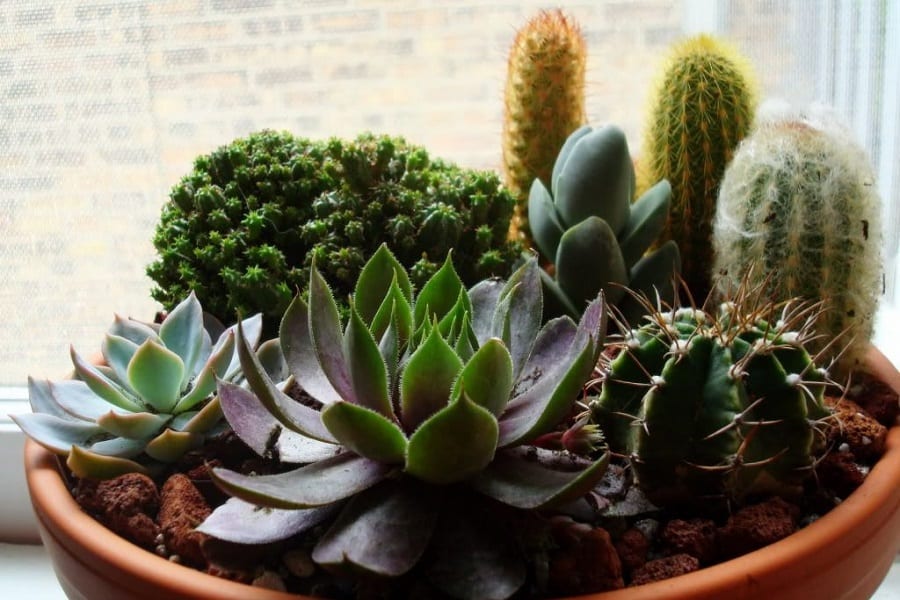 Looking for a perfect guide on the “difference between cactus and succulents“? You are at the right place!

Cacti and succulents sometimes look very similar, which inspires some people to try to grow them together or in similar conditions.

Yet there are some differences between the two which are worth noting if you want both of them to thrive in your outdoor garden or indoor environment.

Understanding the relationship between the two will help you to properly distinguish and identify cactus and succulents.

By definition, a succulent is a plant that stores water in their stems, roots, and leaves. Cacti are fleshy plants that store water, which makes them a part of this group. This essentially means that all cacti are succulents, but not all succulents are cacti.

In this article, we’ll take a closer look at cactus vs succulent and their preferred growing conditions.

Succulents are a diverse range of plants that have specially adapted to relatively dry conditions by storing water inside their stems.

Many also store moisture in their leaves and roots. This characteristic tempts people to think they are exactly the same as cacti. Yet, there are still some distinct differences.

On a taxonomic level, succulent plants exist in over 60 different plant families. This makes them more of a grouped trait of plants rather than a specific plant family.

In fact, there are several identified plant families that contain succulent species within them.

There are even some cacti that are defined as being succulent or are classified as having a succulent trait. Yet not all cacti are succulents!

The etymology of the word “Succulent” traces its history to the Latin word “Succulentus,” which translates as “full of juice.” We see this trait in one of the most popular succulents the Aloe Vera.

This plant is well-known for the mucilaginous gel held inside its inherently thick leaves. Many applaud the medicinal benefits of this gel.

Yet it’s important to note that an internal gel substance in itself doesn’t confirm that a certain plant is a member of the succulent group.

It’s exactly the fact that succulents exist within multiple families that have some debating just what is and what isn’t classified as a succulent.

For example, there are some who ardently claim that yucca has the traits to qualify as succulent, yet others who firmly disagree.

The bottom line is that “Succulent” is a trait or characteristic that’s found in a group of plants throughout a wide range of families. It is not a specific family in and of itself.

In contrast, cacti are a specific family of plants with their own taxonomic classification of plants. Some cacti are indeed succulents, but not all succulents are cacti.

Cacti are sometimes easy to spot by their spines. Yet, this isn’t always the case. Indeed, there are many plants that have spines that aren’t classified as cacti.

It’s also worth noting that there are some types of cacti that don’t technically have any spines.

When it comes to identifying true cacti traits, the one thing that you need to look for is the areoles.

These are essentially small, round bumps that might be light or dark-colored, and appear where spines are, or where you would expect to see them on a plant without spines.

What’s The Difference Between Succulent And Cacti Areoles?

Most cacti lack leaves or branches. This special adaptation trait came about as part of the plant’s ability to prevent water loss in the dry environments where you commonly find them.

Still, it’s worth noting that there are some cacti like the Saguaro that appear to have branches, however, they grow from the areoles.

When it comes to the sometimes-debated traits of a succulent, experts in the field note that the plant must have fleshy leaves or stems that have the ability to store water in case of prolonged dry weather.

However, this definition excludes specific structures organs like the roots, corms, rhizomes, or bulbs, which tend to store key nutrients along with moisture.

These structures often help the plant in question survive other challenging conditions like heat, cold or seasonal decreases in daylight. Essentially the storage trait of a succulent must specifically relate to the storage of water to adapt to dry conditions.

Xerophytic succulents are largely defined as being drought-resistant plants. Whereas halophytic succulents store water to survive in salty environments. You tend to find them in places like seashores, swamps, and saltwater marshes.

Many horticulturalists exclude plants like bromeliads, orchids, and palm-like cycads as succulents, despite some of their similar characteristics.

The fleshy leaves and stems that store water are the definitive trait that distinguishes succulent from another type of plants.

Yet this important trait is just one of many mechanisms that these plants can employ to survive and even thrive in arid conditions.

What Other Traits Do Succulents Have That Help Them Survive In Dry Conditions?

As durable and adaptable plants succulents rely on more than just stored water in stems and leaves to survive.

If you are trying to define or identify whether a plant qualifies for this diverse family, you might also find one or more of the following traits.

What Further Defines A Cactus?

Cacti are technically a flowering plant that belongs to the Cactaceae botanical family. There are currently over 1,700 identified species.

Most of which are also defined as being succulents. These plants originated in North and South America.

The exception being the mistletoe cacti, known as Rhipsalis, which also naturally occurs in limited tropical regions of Africa and Asia.

The majority of cacti are found in deserts. The towering saguaro cactus, known as Carnegiea Gigantea in the Sonora Desert is perhaps the most widely recognized.

However, there are also jungle cacti, like the so-called Christmas cactus known as Schlumbergera.

In general, cacti have many common characteristics that they share with succulents.

In fact, most cacti are technically considered “Stem Succulents” with their leafless, waxy, green-colored stems capable of storing water while also being able to carry out photosynthesis.

With some of these varieties, the stems even resemble leaves. You see examples of this in the so-called Christmas cacti and prickly pears. With these, the plant has multiple stems created by flattened segments.

What Further Defines A Cactus? Cacti Can Also Possess Other Succulent Features Including Things Like

Yet the most important characteristics of a cactus that no other plants possess, is the specialized areola structures at the base of the plant’s spines as well as its branches, leaves, and flowers.

It’s also worth noting that a “True Cactus” will produce large, bold, colorful flowers and fruit throughout its mature life cycle.

There are some succulents that will produce small, and seemingly unimpressive flowers, which indicate that it is not a true cactus.

Just bear in mind that a true cactus needs to be relatively mature in order to flower, fruit and produce seeds. In some cases, this might take years.

So, don’t discount a suspected-cacti, as a succulent if it doesn’t immediately flower when you want it to.

How Do I Care For A Cactus?

Most cacti have the same care requirements as a succulent. Desert cacti in particularly need a lot of bright, direct sunlight.

If they receive less than say 6 hours of sunlight per day it could stunt their growth and lead to other developmental problems.

Cacti are also adapted to handle high temperatures as well as low humidity. Though they can adjust to pretty much most home environments, so long as they receive enough natural light.

When it comes to watering, make sure the potting soil is allowed to completely dry out in between watering sessions. During winter dormancy the cacti will need very little water.